View from Inside March 2007

Offshore wind energy: the step ahead 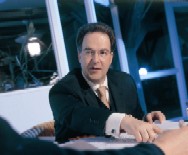 In his recent State of Union address, US President George W. Bush stressed the importance of renewable technologies to the energy supply of his country. The future of a safe, CO2-free energy supply is currently one of the most debated topics in European politics as well.

By Matthias Schubert, Chief Technology Officer, REpower Systems AG
.
Yes, renewable energies are being taken seriously, at last, and that had to come. Wind energy, for instance, has been a mature industry in Europe, and especially Germany, for years; an industry that has created and continues to create hundreds and thousands of jobs throughout the energy supply chain. It has set and is setting high technical standards. But where can this development go further?

The answer is out to sea (i.e. offshore). Taking into account the fact that the best sites for onshore wind turbines in a country like Germany are getting scarce and bearing in mind that we will need to produce electricity from renewable energy to keep prices low, we have to look beyond the coast, beyond onshore. Offshore wind energy, a vision since the early 1980s in Europe, is one of the most important developments in wind energy. The advantages are obvious: the area available is larger, and the wind is faster and less turbulent than onshore, and that means a better energy output. But for various reasons, including political ones, there will be no offshore turbines running in Germany before 2008. High costs like undersea cabling in addition to ecological, touristic and safety concerns have complicated the installation in deep water.

Nevertheless, REpower started the development of an offshore turbine as early as the end of the 1990s. We believed in the need for a specific offshore wind turbine because we believed in the dawning of offshore energy. Fortunately, we have been proved right: around 20 offshore wind farms have now been approved in the German North and Baltic Seas, and last November the German government also gave the green light to the so-called ‘Infrastructure Law’, which obliges energy companies to bear the costs of connecting offshore wind energy to the power grid. Therefore the demand for high-quality, already tested turbines of the 5MW and above class will increase in the mid-term because this shifting of the costs to grid operators is valid for a limited timeframe only. Construction of offshore turbines must have begun before 31 December 2011 in order to profit from the legislation. This gives us the planning security that we urgently needed.

Our first 5MW offshore turbine was installed off the Scottish North Sea coast last summer at a water depth of 44 metres. Now the installation of offshore farms in the seas off Germany , starting with the Borkum West wind farm in 2008, gets closer. We are finally on the right track in Europe and particularly Germany for an economic, safe and competitive energy supply with a source that has always been there: the wind.