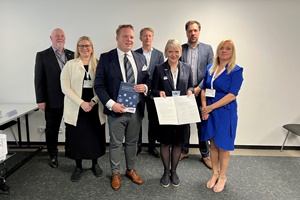 Offshore Wind has gathered momentum in Europe and the United States, where governments in several markets significantly accelerated and increased their expansion plans for offshore wind and green hydrogen.
With a declaration signed by six organisations and associations from Europe and the United States on the occasion of the international WindEnergy Hamburg fair, foreseeable bottlenecks on the way to achieving the internationally growing expansion targets for offshore wind energy are to be reasonably countered.

To achieve these goals, the supply chain must be able to grow with them. At present, however, companies in the supply chain are experiencing some bottlenecks such as the availability of skilled labour, rising costs, and declining availability of raw materials. At the global offshore and onshore wind energy event, experts from Europe and the United States discussed the situation of the supply chain in their markets and explained which challenges have to be mastered with regard to the expansion targets.

"The expansion of offshore wind and green hydrogen provides ample opportunity for employment and value creation. We need a major training and qualification offensive supported by the government. We also need to make sure the carbon footprint of offshore wind projects is a criterion next to further sustainability criteria in all offshore wind auctions. The attractiveness of the country for small and medium-sized as well as large enterprises along the value chain requires political will. A crucial step is as well the strengthening of the maritime industry and shipyards as well as port infrastructure which is mandatory for the maritime energy transition", said WAB e.V. Managing Director Heike Winkler.

"Creation of strong supply chains being able to deliver ambitious goals set for offshore wind sector in present and next decades for Europe and US, is crucial and critically important for the security of energy supplies. It will be achieved only with support of cooperation between suppliers from local markets. The industry needs also, among others, effective financial instruments, facilitation of infrastructural development (especially ports) and open dialogue aimed at multiplication of existing capacities according to standards required in the sector", said Jakub Budzynski, Vice President of the Management Board, Polish Offshore Wind Energy Society PTMEW.

"With existing supply chains struggling to keep up with surging global demand, it is imperative that we forge new partnerships to unlock our full collective supply chain potentials and accelerate development globally. Buoyed by strong support from the U.S. federal government, the U.S. has the tools in place to emerge on the global stage as a premier offshore wind market for floating turbine and green hydrogen technology. Harnessing that potential through international partnerships can quickly build up the U.S. market and support the global industry as it races to achieve ambitious clean energy targets", said Liz Burdock, President and CEO, Business Network for Offshore Wind.

"The delivery on the European and US ambitions for the deployment of offshore wind as a main source of energy puts huge demands on the supply chain. Only through cooperation will the industry be able to deliver on the promises. Governments, developers and suppliers alike should collaborate across borders and along the value chain to secure the continuous deployment of a growing number of offshore wind projects", said Jon Dugstad, Director Wind, Norwegian Energy Partners.

"Astounding numbers in the Netherlands, 70 GW wind power at sea. That means building somewhere between 3,000 and 4,300 wind turbines, next to the already more than 460 turbines present, on 58.500 km2 in the next 28 years", said Dirk Jan Hummel, Project Director, Offshore Wind Innovation Centre OWIC in Eemshaven, and Founder, Northern Netherlands Offshore Wind Cluster NNOW.

"The North Sea Corridor offers a huge natural resource for Northern Europe to find the sustainable energy required to decarbonise its industry and to also provide the energy security necessary to protect us from future energy price shocks. Offshore wind power at scale in Scotland can provide not only clean, zero carbon electricity but also green hydrogen to help the hardest areas of our economies to decarbonise, such as transport and heavy industry, as well as provide a feedstock for a future green chemicals sector. In the process, it will also provide long term jobs and massive opportunity for our supply chain clusters to deliver this vision through collaboration", said Paul O'Brien, Senior Development Manager, Highlands and Islands Enterprise, representing DeepWind, North of Scotland Offshore Wind Cluster.

"Innovative SMEs are set to play a key role as suppliers to offshore wind parks. Yet for many SMEs active in offshore wind it is a challenge to grow and enter new markets. SMEs often encounter disadvantages due to scale, they have to go through complex procedures and are confronted with high costs. The role of offshore wind energy in the plans to make Europe the very first climate-neutral continent is particularly significant. Offshore wind companies are therefore increasingly exploring the opportunities of the green hydrogen sector. The Interreg funded Inn2POWER project wants to stimulate innovation and growth of SMEs in the offshore wind industry and provide them with the necessary expertise and support to explore the possibilities of green hydrogen. The Inn2POWER project is helping to achieve the target of at least 76 GW of offshore wind by 2030, endorsed by the North Seas Energy Cooperation", said Rebecca Verhaeghe, Project Manager Blue Energy, POM West-Vlaanderen.