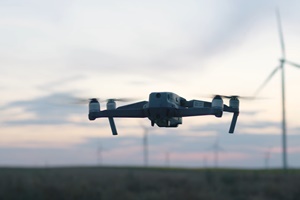 Two Cambridge-based companies, Innvotek and Mapair have trialled a drone system that uses infrared technologies and artificial intelligence to inspect composite structures, including wind turbines and aircraft wings, for defects. Firefly Inspect can hover above wind turbine blades and aircraft using a 1,000W heat lamp to test for defects.
Firefly Inspect was originally a concept for inspecting aeroplane wings when they are stationary within hangars. Thanks to a collaboration with the Offshore Renewable Energy (ORE) Catapult, the technology has now been adapted to include inspection of on- and offshore wind turbines.
During recent trials at ORE Catapult’s National Renewable Energy Centre in Blyth (UK), the drones demonstrated their ability to hover autonomously and manoeuvre close to vertically suspended wind turbine blades. The active thermography module enabled capture of variations in surface temperatures of blades when heated, revealing hidden imperfections that are not visible on the surface.
A further innovation is the use of OptiTrack motion capture technology for navigation, avoiding reliance upon GPS which can be subject to signal interference out at sea. This also enables indoor inspections (inside aircraft hangars) where GPS does not work.
The technology’s development was joint funded by Innovate UK and Canada’s National Research Council with additional support from Cranfield University, Université Laval and Canadian company BI Expertise.