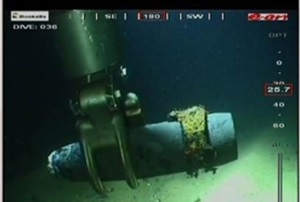 The construction site, with an area of 39 square kilometers halfway between the island of Rügen and the Danish island of Bornholm, is now completely free of remains from the time of the Cold War as well as World Wars I and II. The operation took four months in all and started with an examination of the seabed.

Cameras and sonars identified more than 400 suspicious objects in depths of up to 37 meters. The potentially unexploded ordnances were approached using underwater robots and individually examined. With 43 of those objects suspicions were confirmed that they were unexploded ordnances. These objects were not highly explosive and therefore ready for transport. They were recovered securely by specialist firms and handed over to the authorities in the port of Mukran in Sassnitz. The project was carried out without incidents and within schedule and budget. The installation of the foundations for the Arkona offshore wind farm in the German Baltic Sea can be securely started in 2017 as planned.