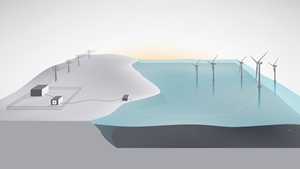 A new battery storage solution for offshore wind energy will be piloted in the Hywind pilot park off the coast of Peterhead in Aberdeenshire, Scotland. Batwind will be developed in co-operation with Scottish universities and suppliers, under a new Memorandum of Understanding (MoU) signed between Statoil, the Scottish Government, the Offshore Renewable Energy (ORE) Catapult and Scottish Enterprise.

Statoil will install a 1MWh Lithium battery based storage pilot system in late 2018. A structured programme is now being established under the MoU to support and fund innovation in the battery storage area between Statoil and Scottish industry and academia. This programme will be managed by ORE Catapult and Scottish Enterprise.