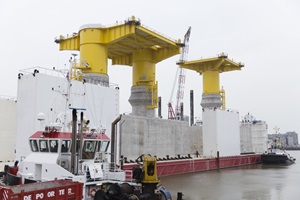 Today (January 8, 2018), the barge with the two foundations of 10,000 tonnes and 8,000 tonnes, destined for the Danish offshore wind farm Kriegers Flak, has left the port of Ostend in Belgium. The barge is towed by the tug Zeus of Finland and is planned to arrive in Denmark on the 15th of January 2018.

Depending on the weather conditions, the first foundation will be installed by the end of January, and the second a couple of weeks later. Once the foundations have been installed the multipurpose vessel Adhémar de Saint-Venant will start with the ballasting and scour protection works. Jan De Nul Group and Smulders joined forces to build two Gravity Based Foundations (GBFs) for the high voltage station of the Danish offshore wind farm Kriegers Flak. Both foundations consist of a concrete part (GBF) and a steel structure on top. Jan De Nul Group was responsible for the design and construction of the concrete GBF, while Smulders tookk care of the design and construction of the steel shafts and decks placed on top. Jan De Nul Group is now in charge of the installation of both GBFs, the ballasting and the placement of scour protection in the offshore wind farm Kriegers Flak in Denmark.