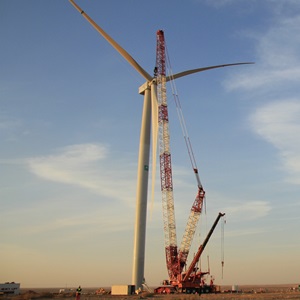 Global Wind Service (GWS) has installed the very first wind turbine in Saudi Arabia. An installation and project management team were deployed from GWS’s Turkish business unit to the gulf state to install a GE 2.75-120 wind turbine. The wind turbine has a power output of 2.5MW and a blade tip height of 145 metres.

A bulk plant in Turaif will be powered by the new system. Saudi Aramco partnered with GE to promote wind power and further its goals for renewable energy alternatives - aiming to produce 9.5GW of renewable energy by 2030.