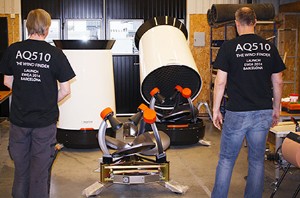 As part of an ongoing study to assess the effects of forestry on wind conditions Uppsala University have now analysed the first 3 months of wind data from an AQ510 SoDAR and compared it to data collected by a nearby fully IEC compliant 180 metre met mast. The distance between the met tower and the AQ510 is greater than 200 metres.

Atmospheric stability was examined using the Metek Sonic anemometers over a wide range of conditions. Analysis of the data shows that neither atmospheric stability nor turbulence intensity has had any effect upon the very good agreement between the AQ510 and the cup anemometers. During the study no filtering of data was carried out for precipitation or for tower shadow effects, yet still the deviation is within +/-2%. During the 3 month Swedish winter period over which a wide range of weather and wind conditions were experienced, data availability ranged from 98% at 40 metres to 84% at 180 metres.