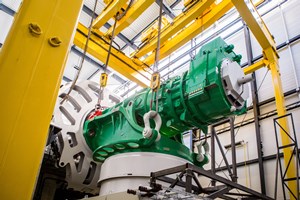 Adwen has commissioned and started testing the AD 8-180 drivetrain at IWES Dynamic Nacelle Testing Laboratory (DyNaLab) in Bremerhaven (Germany), where it is undergoing a test campaign that will last until the end of the year.

The validation process will cover mechanical and electrical tests on the integral chain of the drivetrain and main tower components. By simulating operational conditions for extreme and fatigue loads the tests will enable the validation of these key components. The process will also allow the validation of individual and fully integrated subsystems as well as the complete drivetrain operation at full power. Adwen started the works at the test bench by the end of last year with the assembly and commissioning of the electrical system. In April of this year the drivetrain was transported to DyNaLab to start the mechanical assembly as well as the assembly of auxiliary structures for sensors, lubrication systems and the set-up and fine tuning of more than 350 sensors that will be used during the verification process. The prototype will be installed in Bremerhaven by the end of this year.