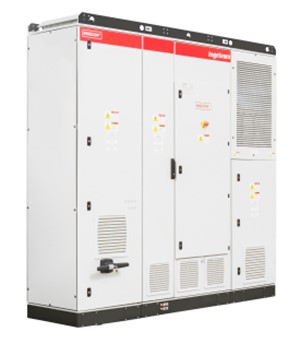 Ingeteam has introduces its crowbarless solution, a modular Fault Ride Through (FRT) system for power converters that will strengthen the grid compliance of Doubly fed induction generators (DFIG). To date, the most widely used system to protect the power converters from voltage spikes is the so-called “active crowbar”, a shunt circuit composed of actively controlled switches and dissipation elements which are connected in order to shunt the high currents, avoiding damages to the converter.

This system, however, presents the limitation that while the active crowbar is connected, the power converter is not in operation, the active and reactive power set points cannot be tracked, and therefore the wind turbine is not being controlled. Ingeteam’s crowbarless power converter, designed to operate in DFIG topology, uses a Modular FRT system that removes the need for the active crowbar. The Crowbarless solution presents behavioral advantages in issues related to weak grids or grid fault events, allowing Doubly fed induction generators to overcome previous technical constraints and hence comply with the strictest grid codes (like the German FGW). Coupled to a suitable selection of grid filter and control loops tuning, it is able to keep the control of the wind turbine during these transients, achieving the controllability required in order to operate in weak grids. In addition, the modularity concept of the FRT system allows for a cost optimisation for each application.