Onshore Wind Turbine Tech to Top Out in Ten Years 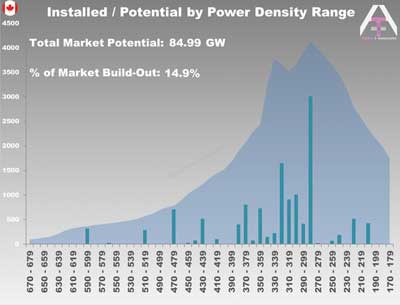 The square-cube law is the notion that turbine costs and component mass increases (approximately) with the cube of the rotor diameter, but the nameplate rating of the turbine increases roughly as the square of the diameter.

While the industry has overcome these limits before with the introduction of carbon-fibre blades, and other lightweight, cost-saving measures, technological innovation is not going to be enough in the near future. We must also consider sheer size limitations, commercial acceptance and the implications of a push up to and beyond the 5.0MW nameplate rating for onshore turbines.

For example, for a 5.5MW onshore turbine with a power density of approximately 200W/m2 the rotor diameter would necessarily have to be approximately 187 metres. While weight and size limitations on transportability can easily be overcome through component segmentation (blades and towers), there is another question beyond technological feasibility which must be asked and answered... commercial viability.

The industry has had an unfortunate perception regarding this difference between technological feasibility and commercial viability for many years, leading to the wasted expenditure of millions in R&D dollars on the exploration of many conceptual ideas. While we think about technological feasibility and whether something could be made to function, the ‘bankability’ is largely not considered when laying out the R&D budget and putting together the new technology introduction (NTI) project portfolio. Just because something could be built, doesn’t mean that it should.

Even with broad-based support for wind energy around the world, turbines with a 210 metre hub height and 450 metre tip height are likely to push the limits of what could be considered commercially acceptable. That is not to say that onshore turbines of at least 5.5MW with a 187 metre rotor are not technologically viable, but the industry has to tread carefully with ongoing market acceptance.

Twenty-five years ago, when the industry struggled to push into the megawatt range, there was a fear that transportation limits would be exceeded. But the inevitable response was a technological solution in blade and tower transport trailers to accommodate a growing appetite for size and power increases. This was facilitated by the economies of scale associated with increased manufacturing and supply volumes coupled with the cost efficiencies of financing a larger project size.

At this point in the industry’s development, most markets are moving to exploit lower power density range winds in close proximity to existing or planned transmission.

While these seemingly finite limits of our current market acceptance could change over time to accommodate 10­–15MW onshore turbines, the economic trade-offs need to be considered. Offshore wind resource is co-located with population centres in many parts of the world, and, with continually declining costs, is opening up more opportunities for project site development.

The market dynamics and economics have changed. It's certainly easier to replace a thousand Kenetech VS 33s with one hundred 3.0MW turbines than trying to push through thirty behemoth 10MW turbines in an onshore market which simply isn't ready for them.

With solar costs continuing to decline, the emergence of distributed energy resources as a market requirement, and butting up against the physical limits of onshore technology, the industry needs to think about the future and adapt to the emerging market conditions.

As the wind energy industry hopes to capture more mainstream interest of utilities and oil majors around the world, it behoves us to focus and channel our resources into commercially viable solutions in order to secure the long-term success of the industry.