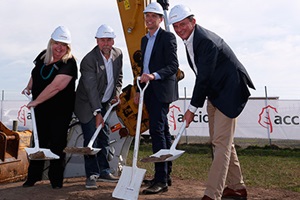 Acciona Energy has begun construction work on the 132MW Mount Gellibrand wind farm in the State of Victoria, Australia. The estimated investment for the project is 258 million Australian dollars. The electricity generated by Mt. Gellibrand will be traded on the wholesale electricity market.

The Victorian Government committed to purchasing the renewable energy certificates generated from 66MW of Mt Gellibrand Wind Farm last year following a public tender process. The contract allows the Government to buy certificates for up to 10 years. Acciona Energy will build and operate the new wind farm, located 65 kilometres west of Geelong and 25 kilometres east of Colac, under its ownership. Mt. Gellibrand will be equipped with forty-four Nordex AW125/3000 wind turbines. The turbines have a rated power of 3MW and a rotor sweep of 125 metres and will be installed on 87.5-metre-high (hub height) steel tower. Following its entry into service, planned for July 2018, Mt. Gellibrand will produce around 429 gigawatt-hours (GWh) a year.