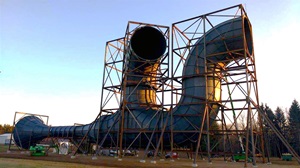 A new US study has confirmed the efficiency of Invelox wind technology according to New Zealand energy company Pacific Wind's generation program manager Reza Sehdehi. The study, which compared the performance of the 200KW Army National Guard Invelox wind tower in Fort Custer Michigan, found that not only was the unit capable of running three turbines in a small tunnel with limited power loss it also allowed turbines to generate electricity from very light winds.

While wind turbines on traditional systems only cut in at 3.5m/s turbines inside an Invelox wind tower only needed 1.3m/s. Announced in 2014 a 30m tall, 70m long Invelox wind turbine was built at the Fort Custer military base in Michigan so that it could generate 80% of its energy through renewable means. Construction finished in April 2016 with one turbine, with the tower being fitted with two more turbines soon after to theoretically double unit's power capacity.