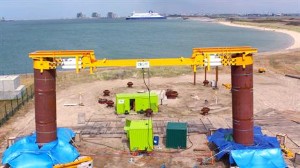 The testing has been undertaken by the joint industry project PISA (pile soil analysis) and was performed to assess and validate a new design method developed by the PISA academic working group led by Oxford University and including Imperial College London and University College Dublin. The academic working group supervised the testing on site, as each of the 28 piles were pulled sideways into the soil until failure. The testing took place in Cowden, England and in Dunkirk, France. The clay till site in Cowden and the dense sand site in Dunkirk represent typical surface soil conditions found in much of the North Sea. Bladt and Dansteel supplied piles of three different diameters for the tests. During testing, other instrumentation was used including fibre optic strain gauges installed by Marmota Industries. In total, 28 tests were conducted primarily investigating the static monotonic but also the response under cyclic lateral loading. The PISA academic working group now has six months to analyse the data collected and use it to confirm the new design methods. Their final report is due to be delivered to the project partners in January 2016.