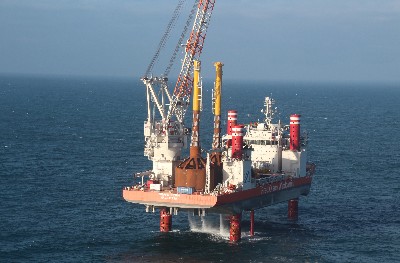 The Mono Bucket foundation is an all-in-one steel structure consisting of a monopile shaft attached to a large-diameter bucket. It is installed with a suction system that requires no pile driving or dredging. A prototype has been supporting a 3MW turbine in Denmark since 2002. A second prototype has been supporting a met mast at Horns Rev 2 in Denmark since 2009. Backed by the OWA program, UF successfully installed two met masts at Dogger Bank in the middle of the North Sea in 2013. A year later, UF completed a series of 29 successful trial installations in various challenging soil conditions off the east coast of England. UF will join LEEDCo’s team to complete the detailed design of the Mono Bucket foundations for the Icebreaker project. The team will work closely with US steel fabricators to ensure the design is optimised for fabrication in the United States. The final design will be complete in early 2016.