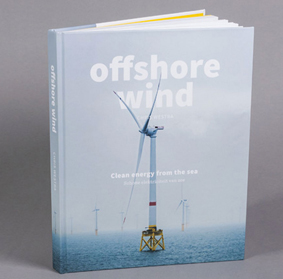 In 1991 the first wind turbines to be placed in the sea were installed off the coast of Denmark. Since then development has continued steadily and a great deal has been learned, both through research and by experimentation. 'Offshore Wind' describes the technologies and development of this type of wind energy in general, paying special attention to the industry off the west coast of Europe.

If Europe is to achieve its goal of generating 12% of its energy from renewable sources by 2020 a minimum of 10,000 affordable sea-based wind turbines will be needed. By late 2012 almost 5,000 offshore wind turbines had been installed in coastal waters off Europe, with a combined capacity of over 3,000MW. The global potential for offshore wind energy is enormous. From European beginnings many offshore wind projects are being developed in North America, India, China and many other parts of Asia, and there is a predicted worldwide installed capacity of between 440 and 1,150GW by 2050. This new industry is expected to create hundreds of thousands of jobs worldwide. It has been calculated that offshore wind energy could satisfy seven times the current European demand.

The author of this new book, Chris Westra, is well placed to write this introduction to the offshore wind energy industry. He spent 20 years at the university of Amsterdam and 17 years at ECN (Energy Research Centre of the Netherlands) in Petten working on the introduction of wind energy, as well as being managing director of We@Sea.

The chapter ‘development of wind energy at sea’ gives attention to aquaculture, environmental impact, wind measurement, finance, risk and insurance, and wind farm layout. The chapter ‘technology at sea’ pays closer attention to the turbine itself: foundations, vessels, electrical infrastructure, operation, maintenance, health and safety. The biggest chapter of the book (82 pages) gives an overview of all offshore wind farms. The North, Baltic and Irish Seas all offer good opportunities but need support from national and European policies. This book contains information about all the current wind farms with details about each farm and a chart with its location.

The book is very well illustrated throughout which makes it an accessible and attractive production.

The text is in English and Dutch on all pages simultaneously.

A sustainable future will need offshore wind energy; this book shows why and how. It is highly recommended.