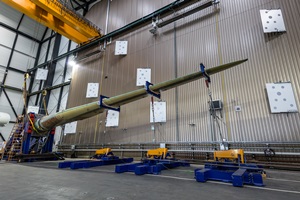 For the very first time, a rotor blade with bend-twist coupling was tested at Fraunhofer IWES´ rotor blade test rig. Although the setup for the rotor blade torsion test is similar to the scenario for static testing, it is in fact more complex as the additional deformation has to be measured precisely.

During the rotation of a large wind turbine with rotor blades 80 metres and longer, each rotor blade is intermittently positioned close to the ground and a short time later at a height of around 200 metres. Due to the uneven wind distribution between ground level and the top section of the wind turbine, rotor blades are subjected to strong fluctuations in wind load.

At the Center for Lightweight-Production-Technology (ZLP), located at the DLR site in Germany, scientists from the DLR Institute of Composite Structures and Adaptive Systems have produced a 20-metre-long rotor blade with structural bending torsion coupling. In doing so, the materials of the blade (glass-fibre reinforced plastic, wood and plastic foam) are placed in such a way that under wind load the blade not only bends backwards, but above all twists.

Rotor blades with bending torsion coupling are able to independently adapt their geometry to the wind conditions. At higher wind speeds the rotor blade twists, thus exposing less contact surface to the wind, which enables the load on the installation to be reduced.

The aim of the accompanying measuring campaign is to determine whether the load reduction thanks to BTC seen in the simulation can be recreated under real-life conditions and whether its effect is as pronounced as expected. Within the coming year the scientists will produce a complete three-blade rotor with the same dimensions, which they will subject to open air wind turbine testing under realistic load and weather conditions at the US National Renewable Energy Laboratory (NREL).