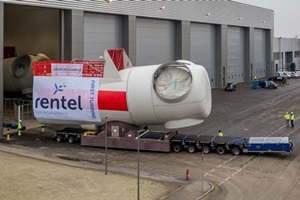 The first complete D7 nacelle built by Siemens Gamesa Renewable Energy in their new production facility in Cuxhaven (Germany), was rolled out of the manufacturing plant on the 15th of February. In this new facility, the different parts of the nacelle are assembled in separate production lines for the generator, hub and back end.

They are then ‘clicked’ together at the end of the assembly lines, after which rotational and system tests are conducted, all indoor in this factory. This nacelle will now go into storage close to the load-out ramp where it will be conditioned and await the first shipment to the REBO Site in Ostend, planned for early March 2018. All offshore wind turbine components such as nacelles, blades, towers and electrical modules, will be shipped to the REBO Site in Ostend (Belgium) where additional assembly activities (tower assembly) and load-out on the installation vessel takes place. Installation activities are planned to start early May 2018 to be finished in September 2018. The entire wind farm shall be fully operational by the end of 2018.